Today, Lucia Ronchetti's new opera, Esame di mezzanotte, with a libretto by Ermanno Cavazzoni, will be performed in Mannheim, at the National Theater. 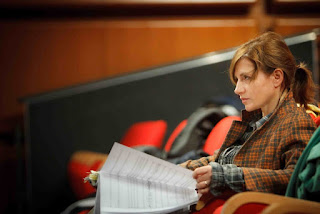 The libretto in Italian by the author Ermanno Cavazzoni, who previously wrote the original idea for Federico Fellini’s film Die Stimme des Mondes (The Voice of the Moon) was created on the basis of his novel Mitternachtsabitur (Final Exam at Midnight).


A young man driven by anxiety to insomnia is suffering from a typical case of extreme fear: his final exams will take place tomorrow and he has forgotten everything ... At night, Girolamenti wanders around a library, but the library has lost its actual purpose. It is now like the underground of a city, a collecting tank for non-conformists. Girolamenti meets bizarre creatures and demons that crawl out of the books and lurk under the benches. Fantasies become realities, real fears and surreal occurrences are mixed together until they are unrecognizable. A comic and fantastic opera about the coming end of the world of books, about examinations and lack of concentration, about disturbances and being disturbed, comic nightmares and fears, and not least of all about people who live on the edge of society. (reproduced from the opera house website)

The opera should last about 2 hours, including a 20 minutes intermission. It is a least Ronchetti's third opera, after Neumond (Mannheim, 2011) and Mise en abyme (Dresden, 2015).