Today : world première of Louis Andriessen's 'Theatre of the World' in Los Angeles 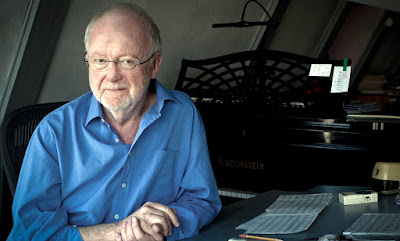 
A boy – Kircher himself, wannabe student, the devil? – takes Kircher and Pope Innocent XI (a patron) on a life-to-death journey across some of Kircher’s wide interests, and the dialogue is polyglot, sometimes within a single passage. The great Mexican mystic/scholar/poet/nun Sor Juana Inés de la Cruz (1651-1695) was highly influenced by Kircher, and she appears as a sort of platonic intercontinental lover, singing passages from her long poem Primer sueño (First Dream). (reproduced from the Los Angeles Philharmonic Orchestra website)

The performance should last about 2 hours. The required orchestra is the following :

After 2 performances in Los Angeles, the work will subsequently be performed by the Dutch National Opera in Amsterdam in June 2016.