Today, François Fayt's third opera, Das schwarze Blut (literally Black Blood, but usually translated as Bitter Victory), with a libretto (in German) by Marcel Maréchal after Louis Guilloux will be performed for the first time in Erfurt. 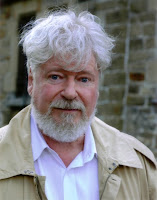 It is the composer's third opera, after L'Arbre de Mai (1993) and Le Dernier repas (1997). The original 1935 novel concentrates on the psychological alienation of an individual. It is based in Guilloux's memories of his philosophy tutor, Georges Palante, an anarchist thinker who eventually killed himself in 1925.


One day in 1917 an aging philosophy tutor, nicknamed Cripure (contraction of Critique of Pure Reason), feels unable to give advice to a student who is departing for the front in World War I. Amidst the horror of the war, he feels increasing disgust at life. He remembers how, years ago, he lost his wife. He is now living alone, supported only by Maia, his lazy housekeeper. His youthful promise as a writer and thinker has long since evaporated, and his body is becoming disturbingly abnormal as his feet become excessively large due to an illness. He hates himself, his colleagues and his students. He takes a class at which the students play up. In the afternoon he consoles himself with drink.
As the evening wears on he learns about disasters and local tragedies, deaths, robberies and betrayals which convince him of the irredeemable corruption of humanity. French soldiers are becoming mutinous as the war continues without hope of an end. Cripure becomes involved in an altercation at the railway station as disaffected soldiers riot. He hits a jingoistic "patriot" and is challenged to a duel, which he accepts. Convinced that he will be killed, he writes a will. To his surprise local people rally round to support him, including his housekeeper and old friends. Cripure's challenger is discovered to be a hypocrite and is forced to back off.
Saved from death, Cripure is more disturbed by the new evidence of human solidarity than he was by the consolation of despair. Unable to imagine a new life, he shoots himself. (from wikipedia)