I have recently acquired the DVD recording of David Alagna's opera Le Dernier jour d'un condamné published by Deutsche Grammophon. I already had the CD recording. 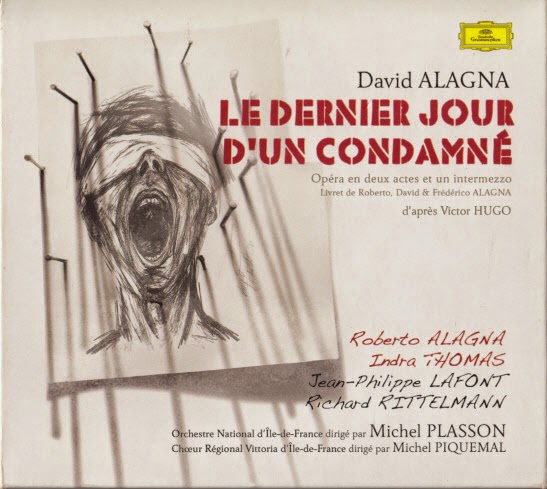 The concert made possible to perform the opera with only 4 singers. For the video, all 13 characters had to be played by a different singer.

Here are some facts about the DVD :
Duration : 106:53, no bonus material
The back cover indicates "Region/code : Pal", which means nothing. It is impossible to find a region code.
The opera is sung in French. There are no subtitles.
Act 1 is divided into 28 tracks, and act 2 into 13 tracks.

Unfortunately, like many other publishers, DG has decided to have music from the opera to be played on all the title pages, and that is an absolute shame : why should the viewer listen to music before the performance starts, or after it is over ?

There is no 'introduction' to the performance when the programm starts : the opening credits are given during the overture of the opera. The pit and the orchestra are briefly showed during the intermezzo between the two acts (no applause at that point). The audience and the hall are visible during the curtain calls, at the end of the performance. When the director appears, the final credits start, as if the director had no importance !
Well, it is true that, for this performance, she (Nadine Duffaut) could have been replaced by almost any other, to produce such a boring staging. The stage is divided in two parts : on the left side, the cell for the 1828 episodes, with Roberto Alagna, on the rght side, a cell with tiled floor and walls with Adina Aaron.

The booklet includes the following information :
- dates of first performances,
- complete cast and crew,
- tracklisting (that is the only word in English in the whole booklet, as if there was not Franch word available),
- two quotes from Victor Hugo and Nelson Mandela, as a 'note de mise en scène' signed by the director, showing how clueless she was,
- the synopsis,
- a speech by Robert Badinter (French Attorney General when the death penalty was abolished in France in 1981), given before the world première in Paris,
- the complete libretto
- a few picture from the staging.
- no biographies of singers.

This is a very disappointing DVD, with only information that is absolutely necessary. No one seems to have been the least concerned about the story of the opera and all issues related to it. It is only designed to sell as many copies as possible, without spending to much money on it.