A little more than a year after the world première performance of Philip Glass' last opera, Spuren der Verirrten (The Lost) in Linz (Austria), Orange Mountain Music, the label entirely dedicated to the composer's works, publishes a CD and a DVD of the same performance. 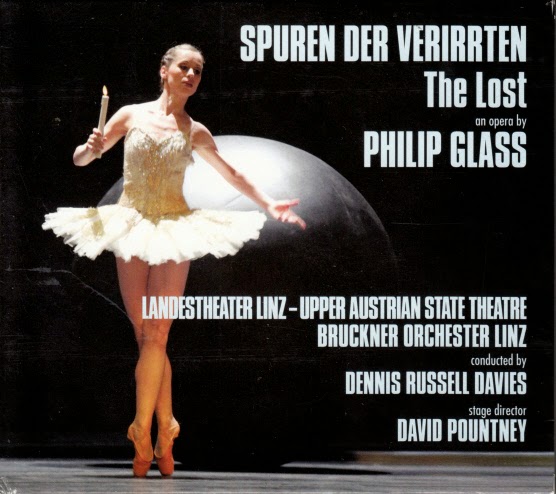 The opera is directed by David Pountney, with sets by Robert Israel, costumes by Anne Marie Legenstein and choreography by Amir Hosseinpour.

The DVD includes a 40 minutes bonus feature film, showing rehearsals of the show planned for the opening of the new theater in Linz. The audio is a mix of English and German, with English and German subtitles, and it is not particularly easy to follow, considering the switching languages. The DVD also has some music of the opera being played on the menu page and during the closing credits, which is very unfortunate.

The tracking of both items are not identical : 11, 10 and 5 tracks for the 3 acts on the DVD, 10, 10 and 2 on the CD. One might wonder on what basis the tracking has been made. The DVD has no booklet included. The bilingual (English and German) CD booklet is rather complete, with complete cast, an article on the work, the complete libretto and biographies of the artists. They could have used the same booklet for the DVD !

The 'New releases' page of the Orange Mountain Music website is just a gateway to amazon.com. The Philip Glass website is more interesting : there, we can find some articles on recordings and works. But this recording has not been added yet.