Today : world première of 'The Trial' by Philip Glass in London


Today, the new opera by Philip Glass, The Trial, will be performed for the first time, in London (Royal Opera House, Covent Garden, Linbury Studio). 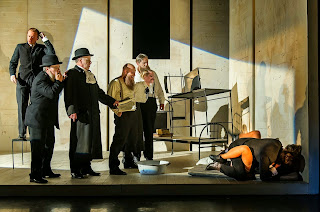 The source of the libretto is Franz Kafka'sz novel, adapted by Christopher Hampton.


The Trial begins with the unexpected arrest of Josef K. by two men who appear in his bedroom. It is his 30th birthday, so perhaps this is a joke. But it isn’t, although he is allowed to carry on with his everyday life. The reason for his arrest is not made clear and so K. is forced to defend himself against an unknown charge, attending a Court that takes place in the strangest of locations at unspecified times. Initially K. resolves to fight the system and prove his innocence, but at every fresh encounter with a bizarre array of characters the possibility of resolution evaporates. Stifled by the helplessness of his situation, K. has no choice left but to accept his fate. Which he does. (reproduced from http://thetrial.musictheatrewales.org.uk/)

This world première is a production of Music Theatre Wales. The opera will be subsequently performed in Manchester, Aberystwyth, Oxford, Basingstoke, Cardiff, Mold and Birmingham.

With almost 30 operas in his catalogue, Philip Glass is one of the most prolific living composer. His tage works include Einstein on the Beach, Satyagraha and Akhnaten, and more recently The Perfect American. Two operas have already been composed after Kafka's novel, by Austrian composer Gottfried von Einem (1953) and Danish composer Poul Ruders (2005).