Today, the Teatro alla Scala in Milan presents the world première of Fin de partie, an opera in one act composed by György Kurtag, with a libretto based on Samuel Beckett's play. 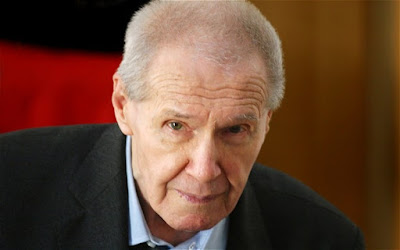 
The setting is a bare, partially underground room, serving as shelter for the four characters: Hamm the master, Clov his servant, and Hamm's father and mother, Nagg and Nell (who live in garbage cans). Hamm is in a wheelchair and makes Clov move him around the room, fetch objects, and look out the window for signs of life. Outside all seems dead and nothing happens. Inside, the characters pass the time mortifying each other and toying with fears and illusions of a possible change, all along sensing the inevitability of their end. (reproduced from Dr. Fidel Fajardo-Acosta's website)

The first performance will be broadcast live by Rai Radio 3. The opera will later be performed in Amsterdam in March 2019, with exactly the same cast.

The score is published by Editio Musica Budapest.