On March 2, the Lithuanian National Opera and Ballet Theatre presented the world première of Post Futurum, an opera in 2 acts composed by Gintaras Sodeika with a libretto by Sigitas Parulskis, dedicated to the 100th anniversary of the restoration of Lithuania's independence. 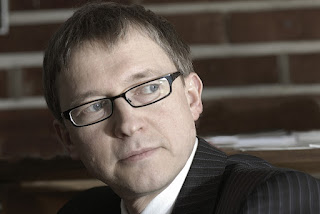 
While writing the music for “Post “Futurum” I was interested in discovering how much life was there still left in opera today: what can one still do with this half living, half dead genre? The actuality of opera is also discussed in the libretto, in a dialogue between God and Satan. The latter is offering to display all events of the past through the form of an opera; God retorts that he hates opera, for it is a dead art. And although this problem is not displayed in the foreground, it is still yet another provocation. On the surface, we are retelling a 100-year-old story, and yet the chosen musical language, the expression of a synthetic work initiates a discussion whether opera may still live today and remain interesting. Can we repeat the epoch of Verdi, when people would come to theatre and fully understand what the characters on stage were talking about? Is it still possible? This question is very important and interesting to me.  (written by the composer for the LNOBT website)