Today : world première of Pierangelo Valtinoni's 'The Wizard of Oz' in Zurich


Today, the Opernhaus Zürich presents the world première of Pierangelo Valtinoni's Der Zauberer von Oz (The Wizard of Oz) with a libretto by Paolo Madron based on Lyman Frank Baum's fairy tale, in a German version by Hanna Francesconi. 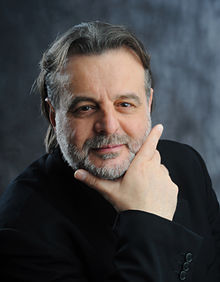 
Every year in the run-up to Christmas, they glitter on various television channels – and reawaken the child in every adult: Dorothy’s fantastic, magical shoes. The famous screen adaptation of the fairy tale, The Wizard of Oz, with Judy Garland as the plucky Dorothy and her lively little dog Toto, has made the hearts of generations of children beat faster. The adventures of the farm girl from Kansas who grows up with her uncle and aunt begin the moment a dangerous tornado sweeps over the farm and carries off the house, together with Dorothy and her dog, to the far-off land of the Munchkins. The house falls onto the Wicked Witch of the West, of all people, thus triggering a series of fantastical events. Admittedly, the Wicked Witch of the East’s red shoes lend Dorothy magical powers, but she also has to pass the most gruelling of tests. But Dorothy is not alone: on her journey, she encounters a scarecrow whose dearest wish is to be given a real brain rather than merely having a head full of straw. The pair also encounters a rusty tin man who would like to have a heart. Another travelling companion is a lion, who has a powerful roar, but otherwise believes he is very cowardly. Together, they set off to find the mysterious Wizard of Oz in the Emerald City, who is supposed to help Dorothy find her way home. They are repeatedly threatened by the Wicked Witch of the West, and even the powerful Wizard of Oz ultimately turns out to be a fraud: his spells have no effect. But time and again, the travelling quartet, including the little dog, prove that they have kind hearts, intelligence and courage, and ultimately survive all their adventures with bravura. (reproduced from the Zurich Opera House website)

The performance should last 2 hours and 10 minutes, with one interval.
Posted by Mathias LEHN at 10:00