Today, John Harbison's opera The Great Gatsby, with a libretto by the composer after F. Scott Fitzgerald's novel, will have its first performance in Europe at the Semper Oper in Dresden. 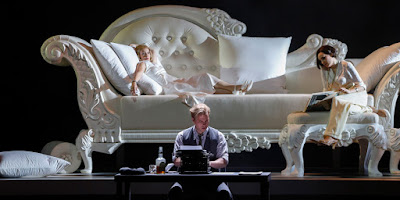 The same production was also performed at the Civic Opera House in Chicago in October 2000 and then revived at the Met in April 2002. In February 2012, a reduced version, with re-orchestration for 30 musicians (instead of the original 120) by  Jacques Desjardins, was performed by Ensemble Parallèle in San Francisco.

In my collection, I have the libretto published by G. Schirmer :

It includes the complete cast of characters with tessituras and a detailed scenario.

In 2014, on the occasion of the 40th anniversay of James Levine's debut, a recording of the broadcast of January 1, 2000, was released by the Met. 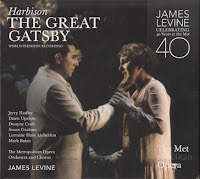 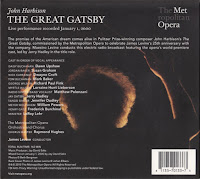 Full information on the opera, including full score, reduced version, vocal score and libretto are available on the Music Sales Classical website.