Today, Marco Tutino's new opera, Two Women, with a libretto in Italian by Fabio Ceresa and the composer, will be performed in San Francisco, at the War Memorial Opera House. 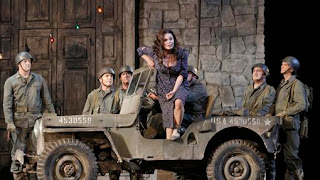 It is Tutino's 13th opera, since Pinocchio in 1983. The composer's lyrical output includes The Servant (2008) and Senso (2011). The libretto, based on Alberto Moravia's novel La Ciociara, was first transformed into a script by Luca Rossi, then adapted to the opera stage.


As the Allies invade Italy toward the end of World War II, a strong-willed widow and her 16-year-old daughter flee Rome for the nearby mountains in a vain attempt to find safety. (reproduced from the San Francisco opera website)