Today : world première of 'Notorious' by Hans Gefors in Göteborg


Today, the new opera composed by Hans Gefors, Notorious, with a libretto in Swedish by Kerstin Perski after Alfred Hitchcock's movie, will be performed in Göteborg. 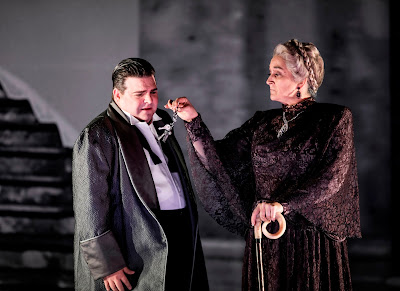 
During World War II, the CIA agent Devlin persuades the American Alicia, daughter of a notorious Nazi, to become a spy in Rio de Janeiro. They grow attracted to each other, but the mission compels Alicia to seduce a man on the enemy side. Blinded by jealousy, Devlin is forced to watch Alicia give herself to another man. (reproduced from the Göteborg Opera website)

The orchestral setting is the following :