Today, the Staatsoper Hamburg presents on its second stage (Opera stabile) the world première performance of Weine nicht, singe, by composer Michael Wertmüller, with a libretto by Dea Loher. 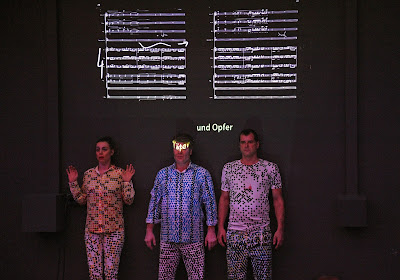 The Levant. Mira, a fourteen-year-old girl, grandfather Zeno, mother Altai and father Ron are welcoming Aki, who left fifteen years ago. He wants to pay back the money he borrowed, trying to open an auto repair shop with his brothers in the South. But the borders were shut down. Now the former neighbor speaks a different language and believes in another God. and Mira shouts her hatred to him, because he has left his aunt Oona behind. But splinters in Zeno's brain hurts him : 'Mira has to make peace with her father' (free translation after the Staatsoper's website).

The opera should last about two hours.